It's Apples and Oranges, Really

History does have a tendency to repeat itself, but maybe not always in the same way, especially when it comes to the supply chain. For example, what is the difference between the bull market of 2018 and the pandemic-driven bull market we are currently in? They both consist of elevated freight volumes and tight capacity, but there are several things that make these two outlier market events very dissimilar.

In 2018, there was a sudden influx of demand, and capacity constraints appeared almost instantly. In the current bull market, simultaneous growth is occurring in two key sectors – the consumer economy, and the industrial economy. That was certainly not the situation in 2018.

In addition, stimulus money filtered into the economy on three separate occasions during the pandemic. This fueled consumer spending by putting money immediately in the hands of almost every American. Again, this did not happen in 2018.

And the final glaring difference is the length of time involved. The pandemic-fueled freight chaos has been approaching the two-year mark, as opposed to the 2017-2018 bull market, which lasted closer to a year.

There are some positive anchors in place moving forward. The industrial economy is recovering, albeit slowly due to supply shortages. Non-mortgage debt as a percentage of total net worth is seeing its lowest levels since the 1960s, and U.S. household net worth has never been higher.

Whatever happens, lessons will be learned and things will evolve in the supply chain. Shippers and manufacturers are going to rethink the way they view inventories and the just-in-time model most likely will be replaced with backup inventories.

We also are already hearing of reshoring examples in the United States. In a recent Bloomberg Business newsletter, Brooke Sutherland writes about the "dizzying" number of plans for new semiconductor plants in the U.S.

"Samsung Electronics Co. has made a $17 billion commitment; Taiwan Semiconductor Manufacturing Co. is building a $12 billion plant in Arizona and contemplating a factory in Germany; Intel Corp. is investing $20 billion in additional U.S. manufacturing capacity. Ford Motor Co. and South Korea’s SK Innovation Co. will spend $11.4 billion to build three battery factories and an assembly plant for electric F-Series pickup trucks in Tennessee and Kentucky. General Motors Co. plans to operate four electric-vehicle battery plants in the U.S. through a joint venture with South Korea’s LG Chem Ltd. Toyota Motor Corp. said this week it would invest $240 million in a new manufacturing line for hybrid transaxles at its existing plant in West Virginia."

This is one driver with whom I would certainly trust my freight. October's inflation rate in the United States
(and there may be worse to come).

November 8-14, 2021: Rates have moved only marginally for dry van and reefer this past week on the spot market, but they are still significantly higher compared with last year at this time. Normally the breakdown of spot freight versus contract freight is 14% to 86%. In 2021, however, the spot market realized an average of 24% of the total marketplace. 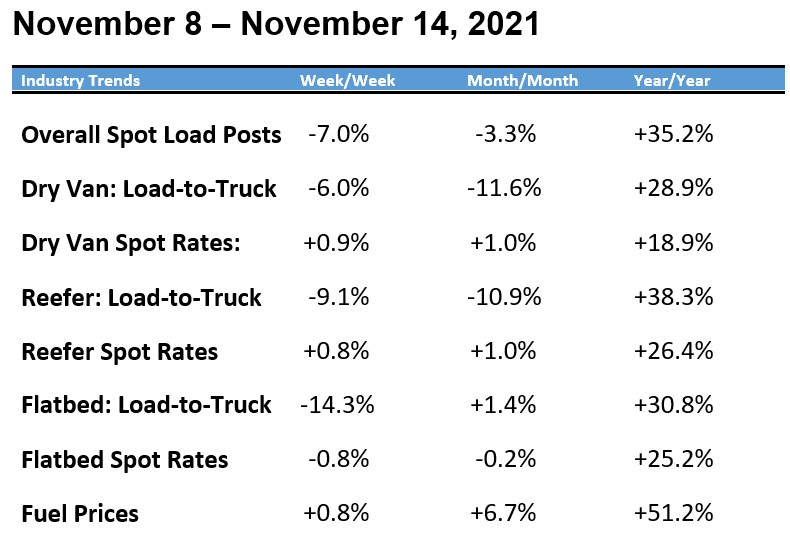 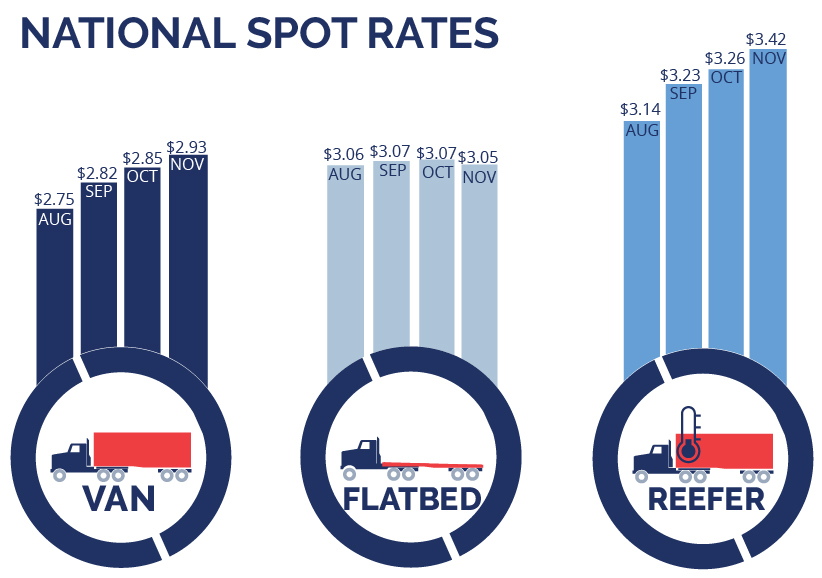 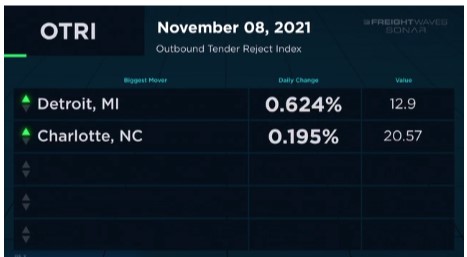 The national outbound tender volume index is falling behind last year's data with a notable dip last week (2.3% week-over-week), although we are still 58% above 2019 levels. Volumes at this point last year were up over 5% month-over-month and climbing.

There are key indications, however, that truckload demand will continue to be strong, and capacity a challenge, especially toward the second half of November. Import volume is still extremely robust, with customs imports up 17.5% year-over-year. The push to fill warehouses with replenishment stock is expected to continue into 2022.

The chart below shows YTD in blue, compared with 2020 in green and 2019 in orange. (Chart: Freightwaves/Sonar)

The national outbound tender volume index is falling behind last year's data with a notable dip last week (2.3% week-over-week), although we are still 58% above 2019 levels. Volumes at this point last year were up over 5% month-over-month and climbing.

There are key indications, however, that truckload demand will continue to be strong, and capacity a challenge, especially toward the second half of November. Import volume is still extremely robust, with customs imports up 17.5% year-over-year. The push to fill warehouses with replenishment stock is expected to continue into 2022.

The chart below shows YTD national rejection rates compared with 2020 in purple and 2019 in green. (Chart: Freightwaves/Sonar)

The DHL pricing power index remains at 70, indicating that negotiations are still in favor of carriers versus shippers. 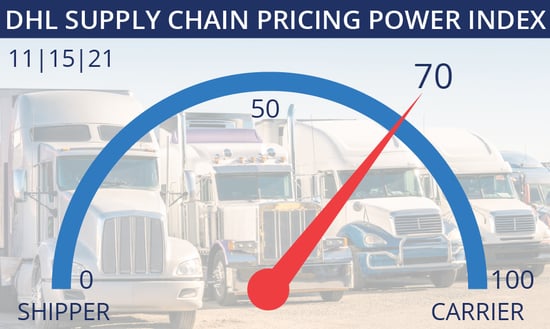 The Georgia Port Authority just announced the opening of nine new rail tracks in the past few weeks to help ease congestion where containers have been stacking up. The Port of Savannah has 80,000 containers sitting and waiting to be moved off the port's 1,400-acre lot.

In an effort to utilize these new rail tracks, state officials have been encouraging large shippers to use rail and intermodal instead of trucks. According to a recent Bloomberg report, GPA spokesman Robert Morris said, “We’re telling them, ‘Wherever you can do so, start converting to rail.’”

The cost of shipping a container overseas is seeing a significant decline, as reported by The Wall Street Journal. Prices fell 26% last week (the first decline since June) from the previous week, now costing $13,295. That is not saying much, though. Compared with the beginning of 2021, when a container cost just $4,200 to make the epic journey, it is still astronomically high.

With trucking capacity only increasing by 8% this year and volumes at the Port of Los Angeles skyrocketing by 30% during the same time frame, it is no wonder we are still experiencing issues. To add insult to injury, there is an estimated shortage of warehouse space, about 25% less than needed. We also cannot forget the labor shortages too, with too few truck drivers, warehouse workers, and port personnel. 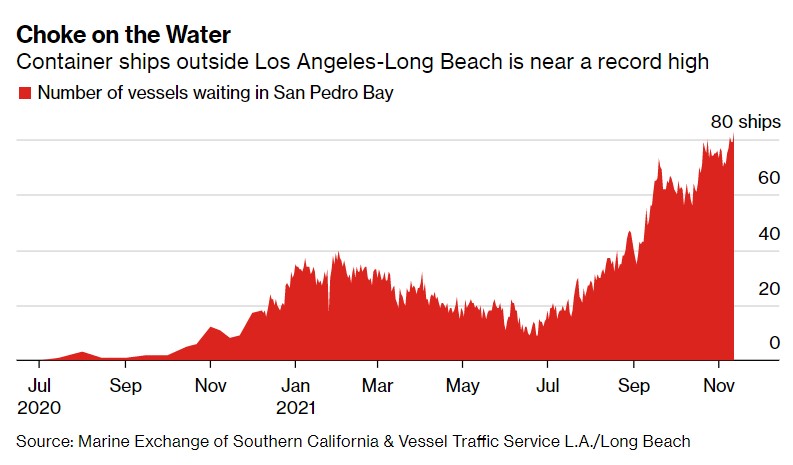 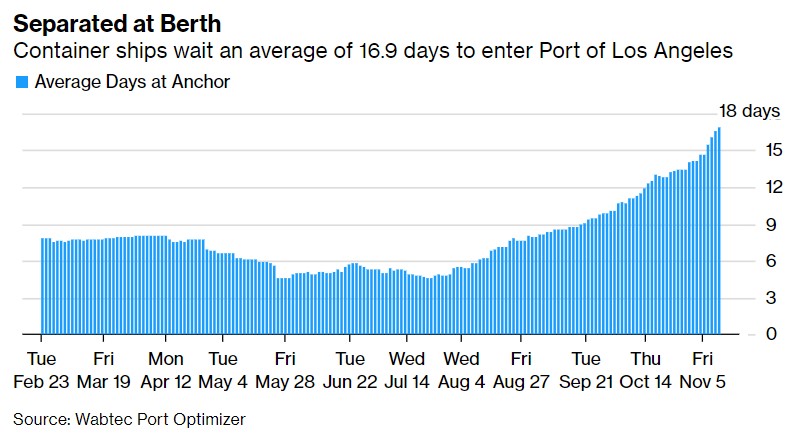 U.S. manufacturing continues to suffer from shortages of supplies, choking an active order season and hindering production growth (which is lower than it has been since July 2020).

The Manufacturing Index closed the month at 58.4 in October, which was a decline from September's final number of 60.7. Keep in mind, anything above 50 is a sign of growth. If there were not such a shortage of supplies, production levels most likely would be much higher.

The chart below shows the Logistics Manager's Index (LMI) in blue, compared with total transportation costs. The LMI is a combination of eight unique components that include: inventory levels and costs, warehousing capacity, utilization, and prices. 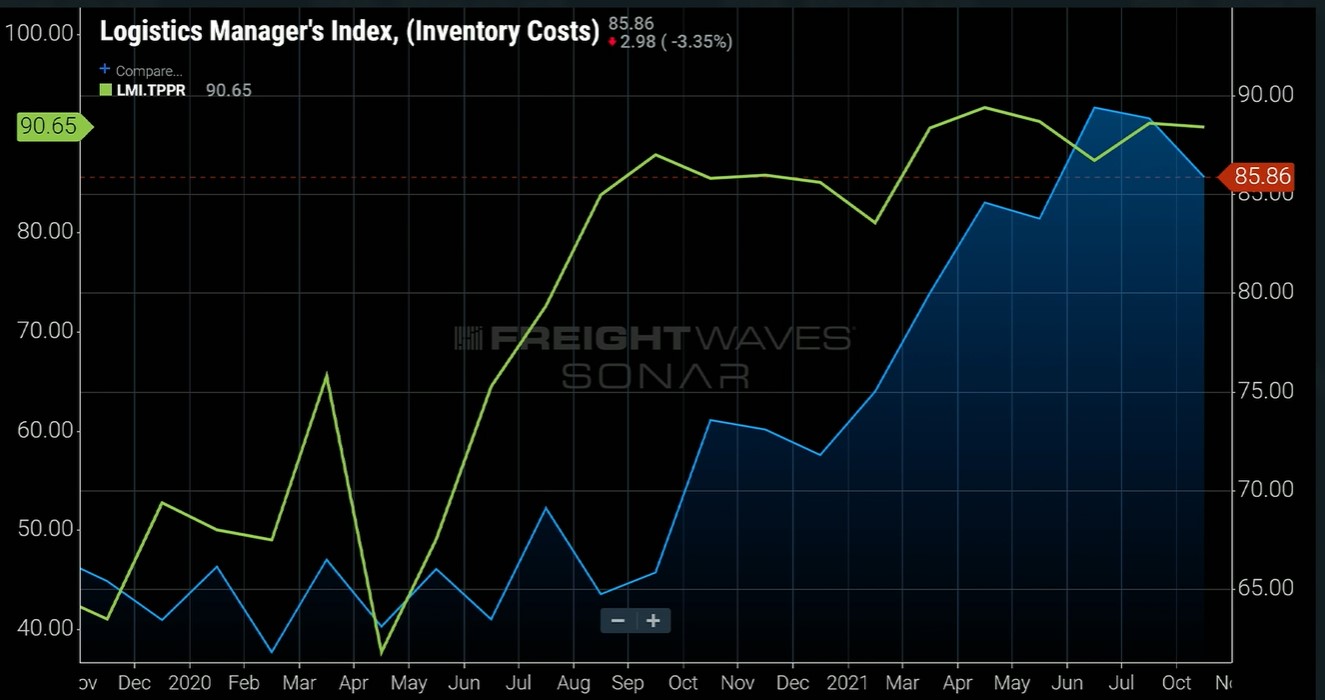 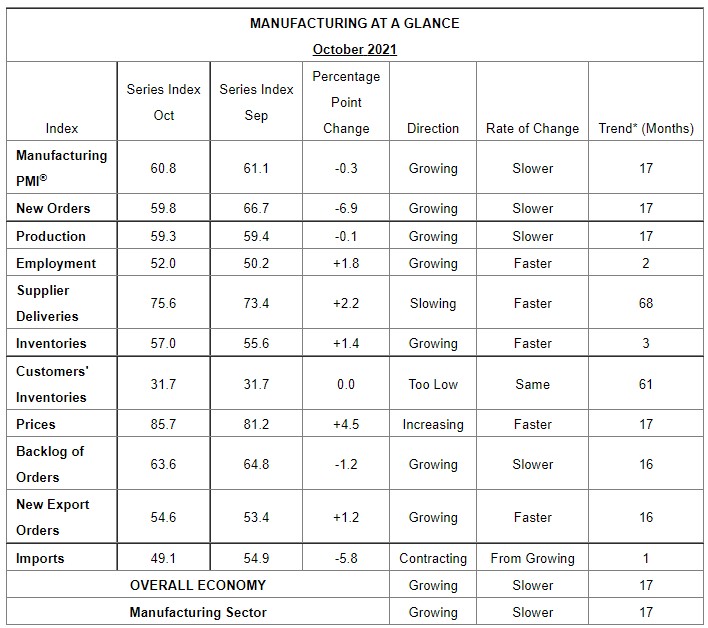 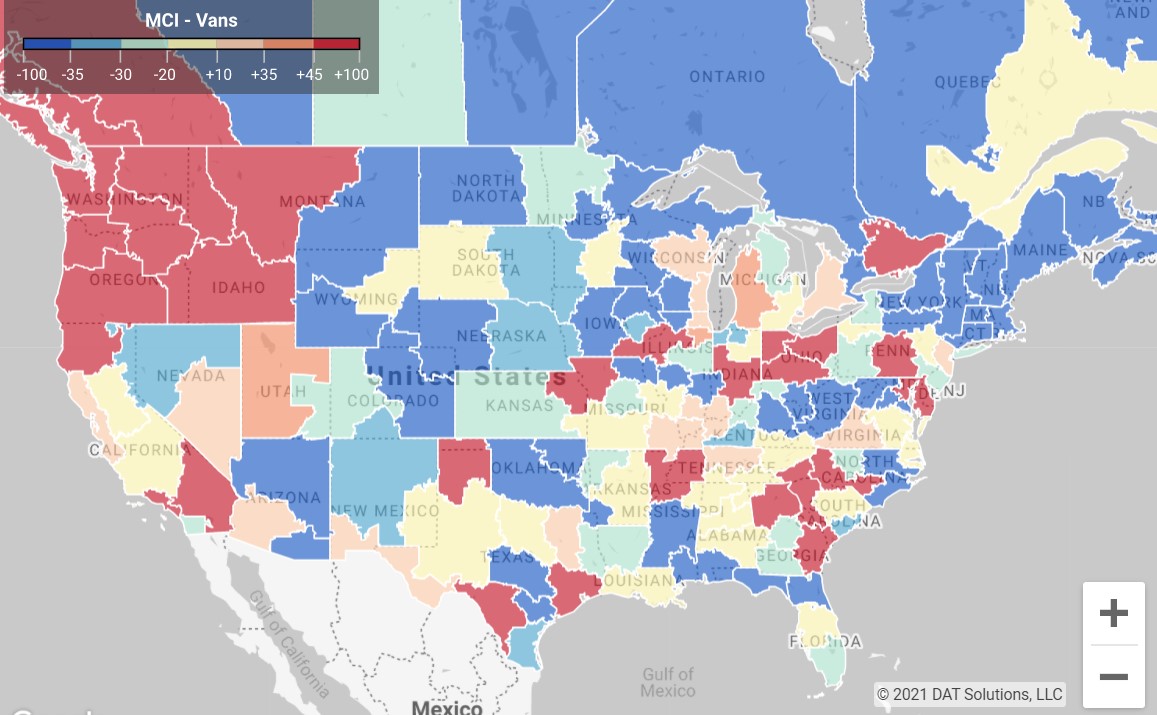 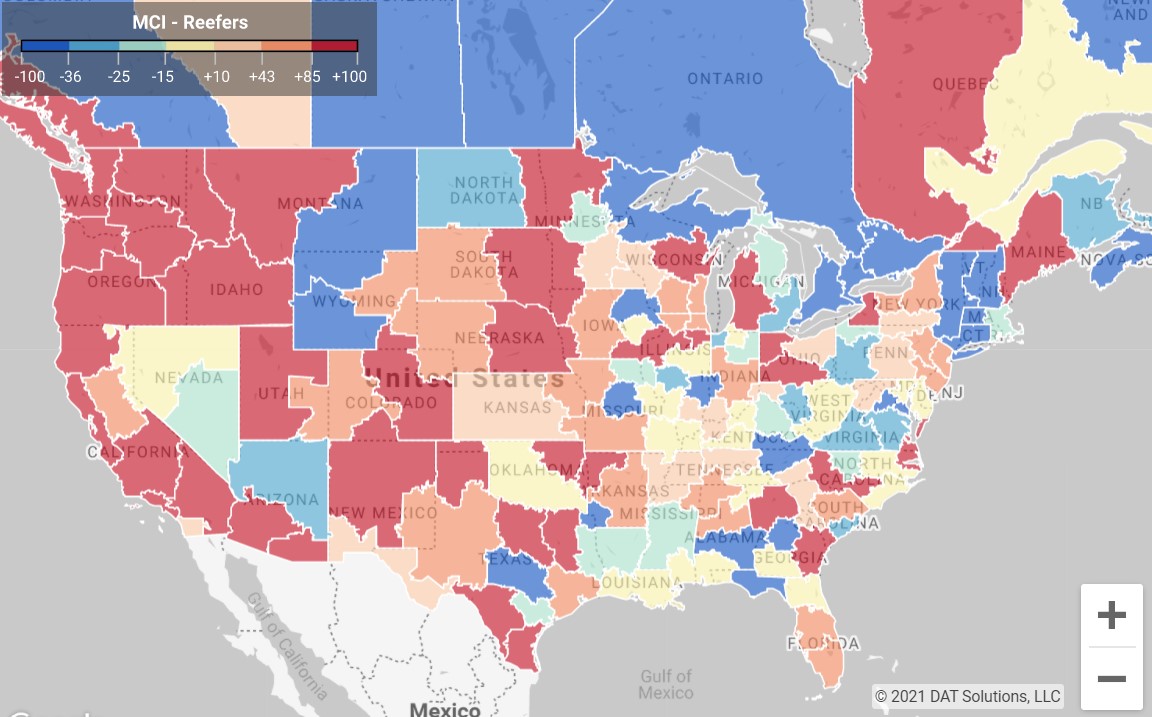 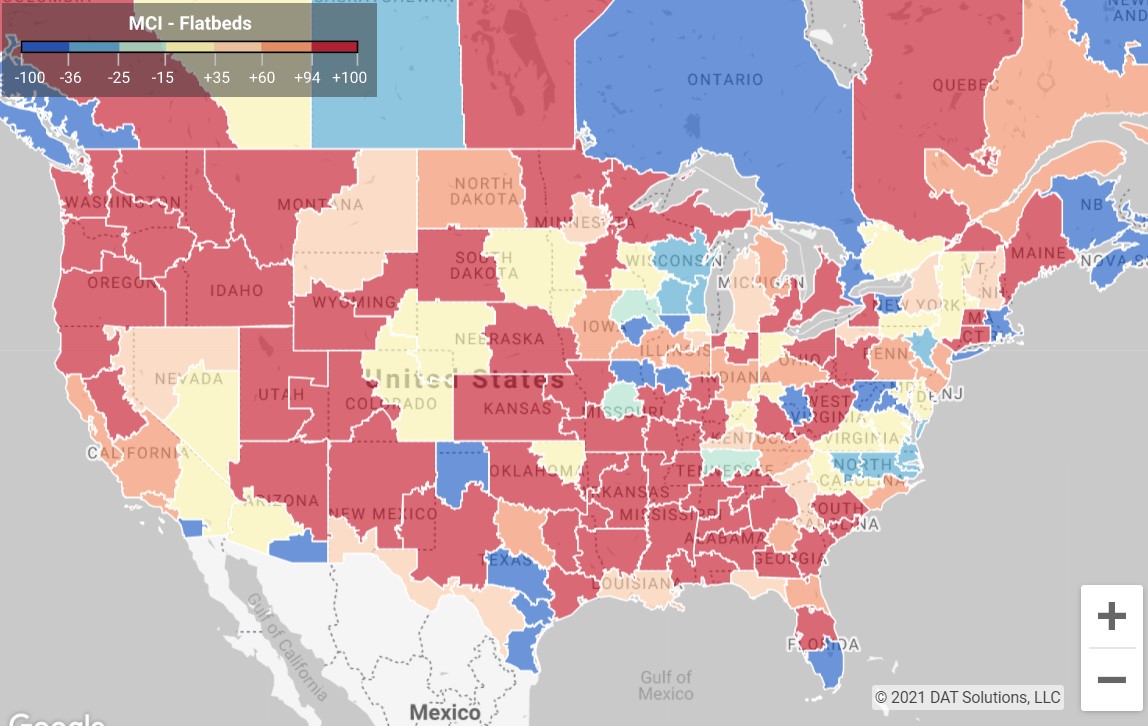