Hurricanes, Cyberattacks, and the 'Network of Connectivity'

What do the Colonial Pipeline cyberattack and hurricane season have in common? They both mark an era that suggests great vulnerability in our aging energy infrastructure.

Hurricane season began June 1, and after the fluky ice storms and an extreme cold snap in February, it thrust the Southern United States into an energy crisis of epic proportions. More than 4.5 million businesses and residences in Texas and neighboring states were without power. The massive failure of an energy grid of that size was a wake-up call for the country.

Several weeks ago, the disruption caused by the ransomware cyberattacks on the Colonial pipeline also affected millions of people. 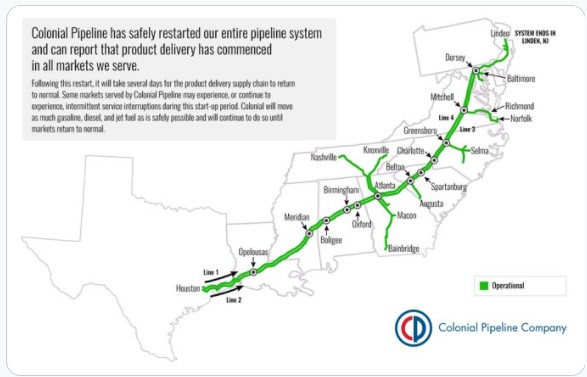 And speaking of cyberattacks, just three weeks after the pipeline incident, JBS SA, the world's largest meatpacker, had to temporarily shut down its U.S. and Australian operations due to a cyberattack. Although the issue was short-lived, CNBC reported, "The disruption quickly had an impact on Tuesday, industry analysts said. U.S. meatpackers slaughtered 22% fewer cattle than a week earlier and 18% than a year earlier, according to estimates from the U.S. Department of Agriculture. Pork processing was also down."

The article went on to note, “The supply chains, logistics, and transportation that keep our society moving are especially vulnerable to ransomware, where attacks on chokepoints can have outsized effects and encourage hasty payments,” said threat researcher John Hultquist of security company FireEye.

As populations rise, our network of connectivity on this planet becomes a larger factor every year. Those of us in the supply chain are especially aware of how one hiccup along the way can have deleterious effects all down the line.

How Vulnerable Are We to Cyberattacks?

Cyberattack disruptions are on the rise.
Transportation networks are just as at-risk as energy platforms and can cause further strain on the global supply chain. May 31 - June 6 - The national average van spot rate for this month is up to $2.72/mile. Reefer rates increased to $3.13/mile. Flatbed spot rates are still around $3.14/mile. Volumes have declined for the fifth straight week. Overall truckload demand, however, is slowly increasing. 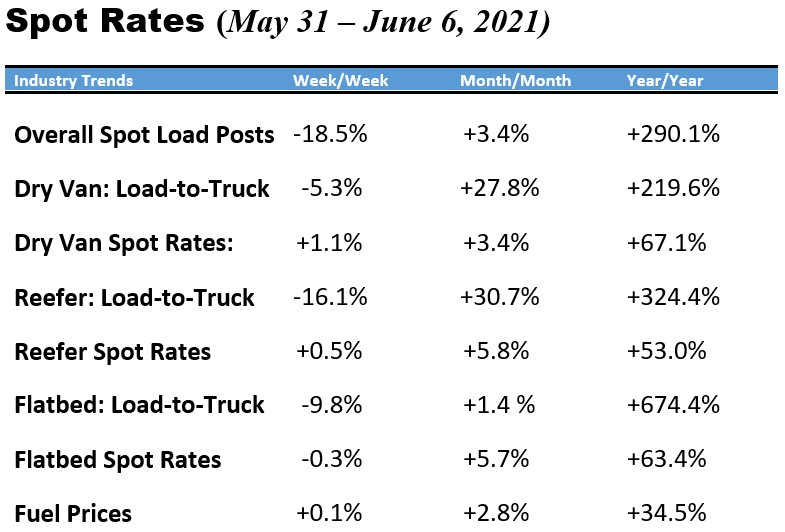 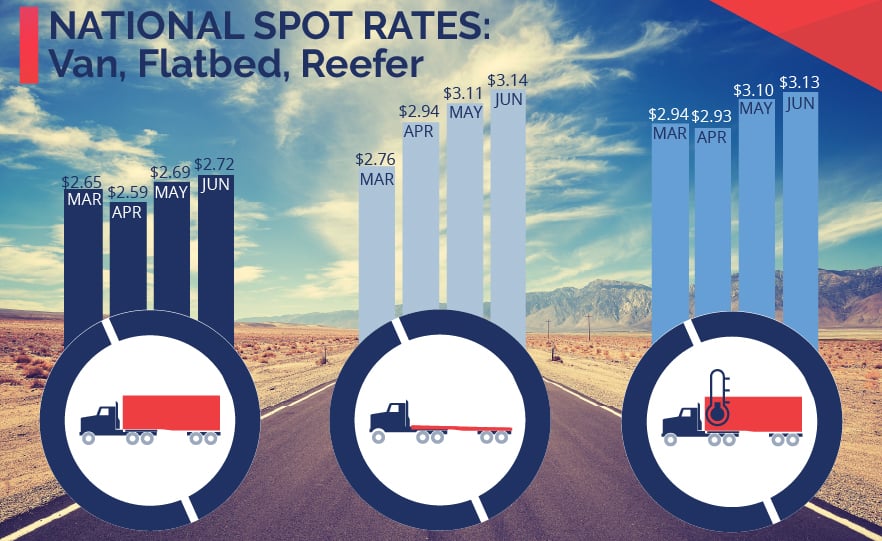 Chart Below: (Source: Freightwaves/Sonar) The image below shows national outbound tender rejections in blue for 2021 compared with the yellow line of 2020.

The chart below may look a little alarming but it is the normal holiday dip typical of the Memorial Day weekend. Outbound tender volumes are expected to rise back up throughout the month. Shippers should work toward getting as much freight out the door as early as possible to avoid June's month-end rush at a time when some produce harvests begin to reach peak harvest and trucks are scarce.

Chart Below: (Source: Freightwaves/Sonar) The image below shows the Memorial Day dip in volume, similar to (but not as severe as) Christmas day in December 2020. A strong rebound is expected this week with volume increasing until the 4th of July holiday.

Even with capacity constraints, U.S. rail traffic was reportedly up 28% in May.

According to the American Association of Railroads Senior Vice President John T Gray, May's intermodal carloads were the highest since October 2019. Also, volumes between January and May of this year have been the best period ever for U.S. railroads for the same time frame.

The dire situation earlier this year at U.S. ports is reportedly improving but there are still problems that will keep freight delayed, such as insufficient warehousing space, container shortages, and aging chassis. Vessels are still waiting offshore, and Oakland now takes the title for being the busiest California port, surpassing Long Beach/Los Angeles.

As reported in an earlier Choptank market brief, the Institute of Supply Chain Management manufacturing report for May showed the Purchasing Manager's Index (PMI) at 61.2%. Anything over 50 is a sign of a growth economy.

Despite the good PMI news, retail inventories are still having trouble keeping up with demand. There are headwinds. For example, Dollar Tree faces staggering import costs and even as manufacturing surges, shortages may persist. The chart below shows that restocking woes are far from over for many large chain stores.

Jobless claims fell below 400,000 last week, another pandemic low. May reports show that the U.S. added 674,000 new positions for the month, according to the median estimate of economists at Bloomberg. Many of these jobs are in the services industry. This was not quite up to expectations, but it is still positive momentum.

There are varying official numbers regarding new jobs. For example, "According to a separate report by ADP Research Institute on Thursday, U.S. companies added 978,000 private payroll jobs in May, the most in nearly a year." Market Conditions. 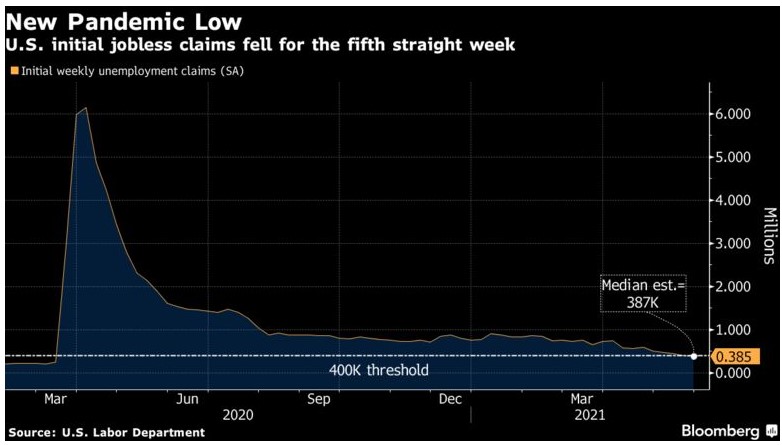 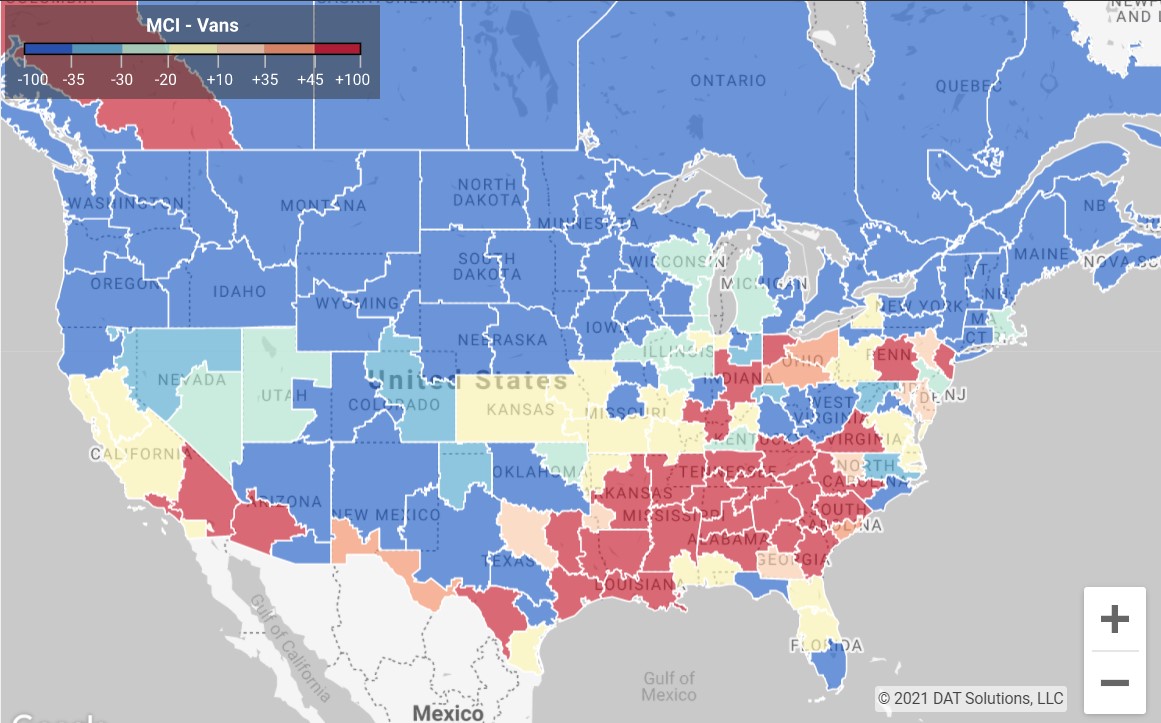 Tight reefer capacity is evident along the California coast, the Southern U.S., and most of Florida. Twin Falls, ID, is also showing tight capacity with a load-to-truck ratio of 2040/105. 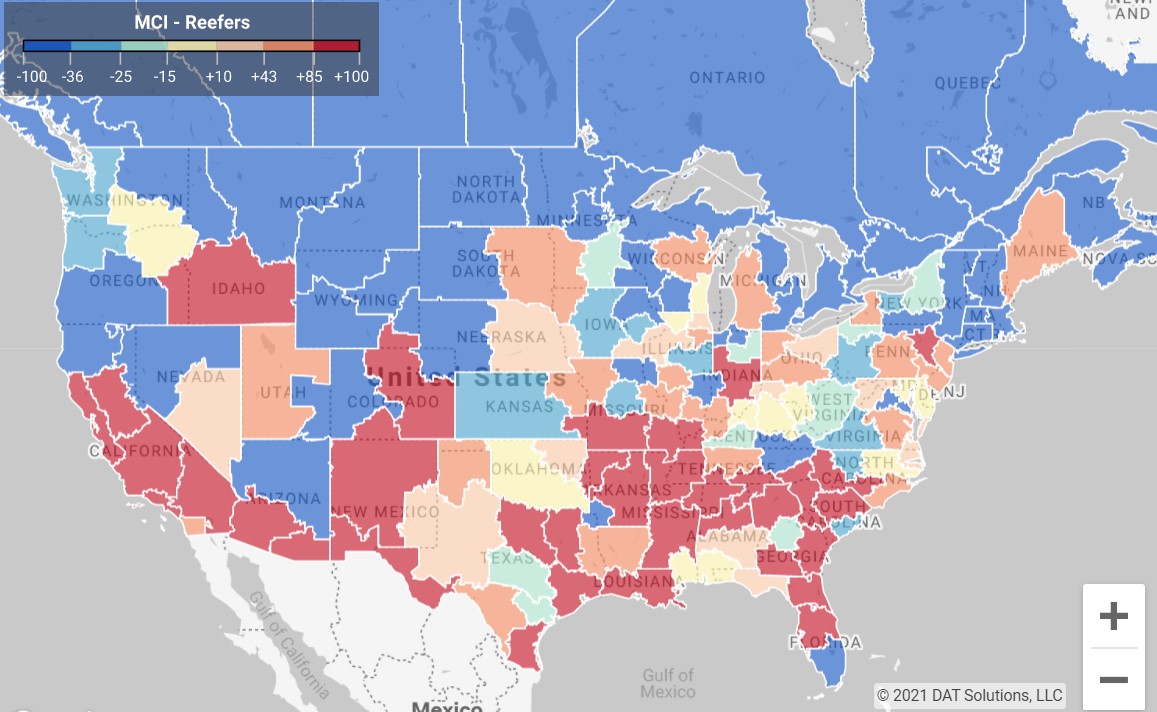 Flatbed capacity continues to be tight across the entire United States, week-over-week, and still no signs of loosening up. 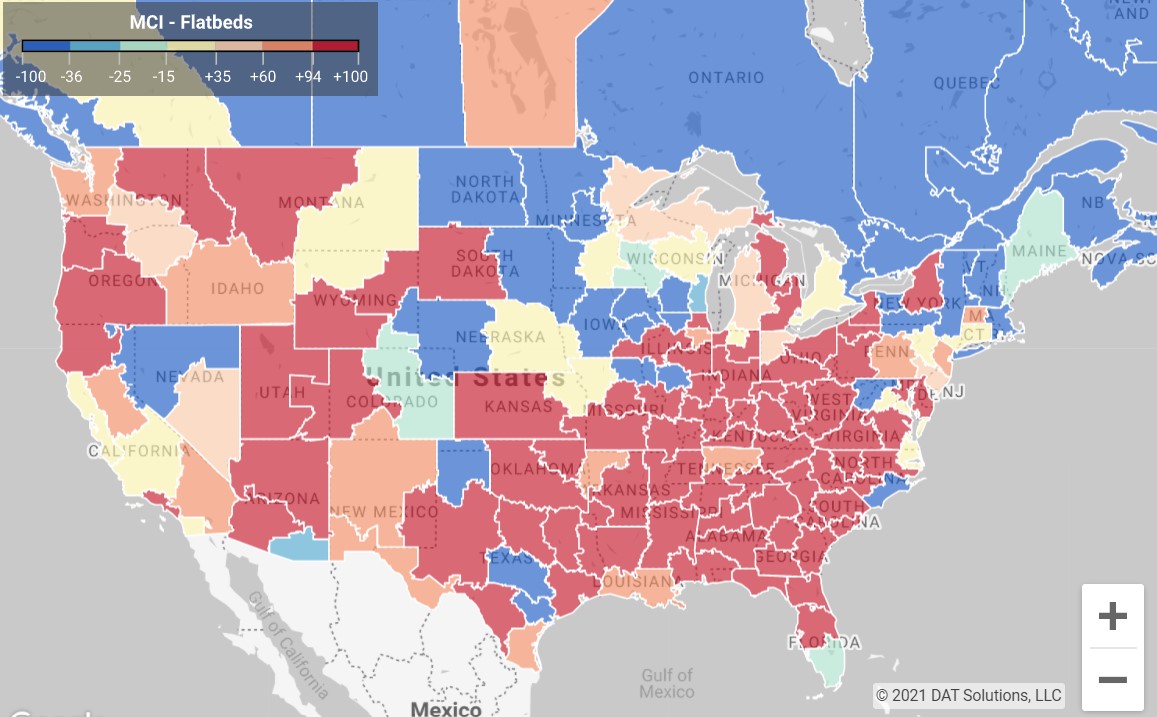 The needle is not moving on the DHL pricing power index as it remains at 70. 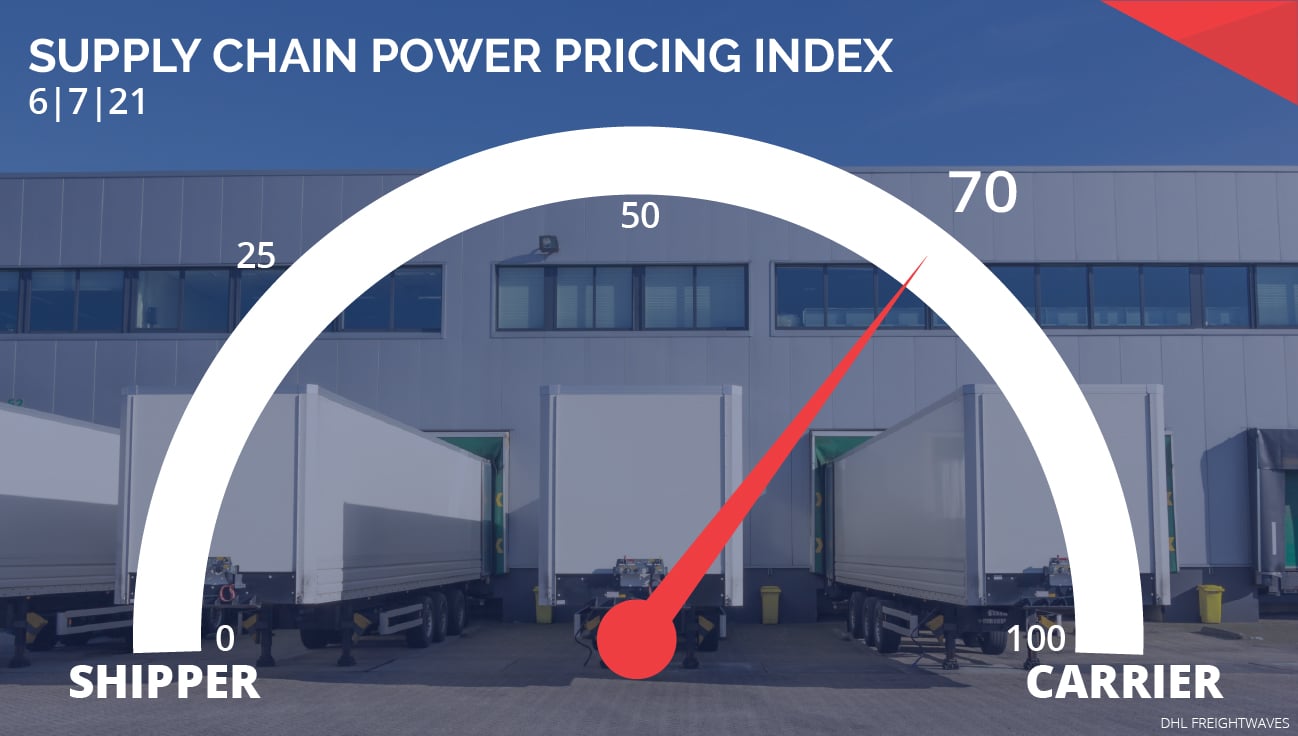