Supply chain interruptions over the past two years have had an unprecedented impact on the economy. Google can attest to that, as the number of hits for the search term "supply chain" rose 194% in October this past year. Even more impressive was the sharp rise in people looking up "port congestion," a term that saw a jaw-dropping search spike of 376% compared with the beginning of 2021.

Every week it seems the average American is learning more about the logistics industry as access to goods becomes more costly and availability becomes less predictable. It is important to keep in perspective that supply chains are not simply ports, rails, trucks, airlines or ships. Supply chains are also the people behind all these modes of transport. When the people aren't there, the supply chain no longer functions properly. Such is the case with the most recent COVID-related shutdown in China. Watch this week's video.

... and its effects on the supply chain In other supply chain news this week:

January 3 - January 9, 2021: Load posts were slightly down in the reefer spot market this past week compared with the week prior, but overall posted loads jumped by a whopping 52% from the week before. Both van and flatbed saw increases in posted loads, although rates slipped slightly. 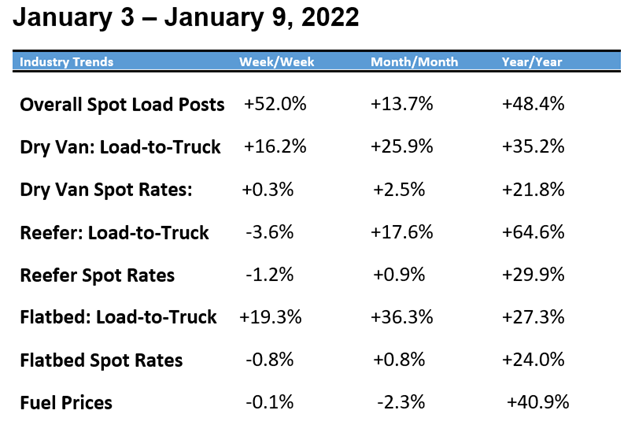 Below: Weekly change by markets for domestic intermodal spot rates (including fuel surcharges).

On average, the number of miles on one gallon of fuel it takes

to move one ton of freight on U.S. railroads. - Freightwaves

Quote of the Week

“Basically, Americans went on a shopping spree as soon as lockdown started, and we haven’t really stopped since.”  - Christopher Mims, Author of Arriving Today

January and February typically are considered slow times for the freight market. The challenges this January, however, are expected to be similar to those of Q4 in 2021, if not even more pronounced. Comparing volumes between 2020 and 2021 during Q4's holiday season, 2021 rounded out the year markedly higher than volumes in 2020.

Truckload Outbound Tender Volumes do not always correspond accordingly with Outbound Tender Rejections. Volumes remained high for most of the year. One would assume that rejections also would be elevated, but rejections dropped off after April and, with few exceptions, didn't climb back up again until early December with the approach of the holidays.

Chart Below: Freightwaves/Sonar (The blue line shows volumes compared with an orange line that indicates rejections for 2021.)

The chart below clearly shows the volatility of rejection rates from year to year. For the first time in months, rejections are almost at the exact same levels they were a year ago at this time. But unlike last year, rejections this January haven't backed off after the holidays.

The national reefer rejection index topped just over 40% (41.12%) for the first time since May of last year.

Last week's rejections by mode show the uptick in reefer rejections as mentioned above. Flatbed rejections also are increasing compared with the beginning of last year. Van rejections have seen little change, and capacity is much easier to access than the other two modes.

Chart below: The Wall Street Journal 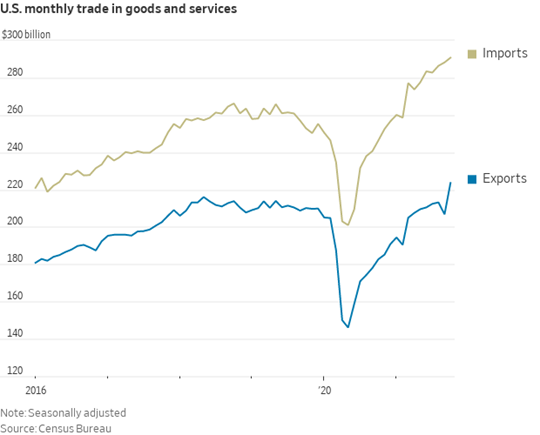 From DAT Solutions, this morning's market conditions are shown below for the previous day for van, reefer and flatbed. Areas in red exhibit areas of extremely tight capacity. 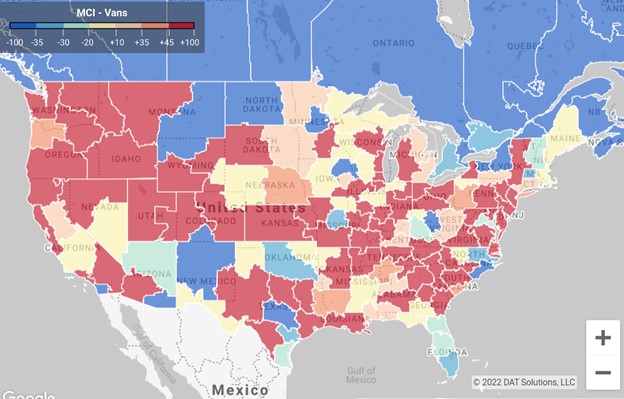 Shippers rely on the relationships they have with their 3PLs to ensure a smooth continuation of service whenever capacity gets tight. We hope you will continue to count on Choptank and Hub Group for all your freight needs, whether it be van, reefer, truckload, LTL, intermodal or cross-border shipping.

Your sales representative or a member of our professional logistics team is ready to help, so give us a call! 800.568.2240. If this email was forwarded to you and you would like to receive it, sign up here.