HIGH PRIORITY • HIGH VALUE
The challenge for NASA - Jet Propulsion Laboratory (JPL) was finding a reliable 3PL, or transportation provider, to ship high-priority, temperature-sensitive ice core samples to their destination more
than 2,790 miles away during one of the hottest weeks of the summer.
The shipment represented weeks of intensive preparation, acquisition and hard labor in an inhospitable climate, thousands of miles away. Because the freight was irreplaceable, the high-dollar, high-value cargo required experienced, professional transportation services with
real-time visibility into the shipment.

RESULT
With the aid of Choptank Transport, NASA JPL’s shipment of ice core samples not only delivered in excellent condition but were delivered ahead of schedule. “Choptank had a reefer truck standing by, pre-cooled, frozen to the max at minus ten degrees, continuous,” said Brooke Meade, Carrier Sales Representative whose team was
assigned to the shipment. “As soon as it got there, we loaded the samples in, shut the doors, and monitored it from the day it shipped to the day it delivered. We were in constant communication with the team drivers.

It all started in a small underground bunker in Antarctica, with a French scientist, his two colleagues, and a glass of whiskey. After a long day of drilling through ice, a few ice chips from a core sample were exactly what his glass of amber-colored liquid needed. While staring at his drink, the ice emitted several bubbles that floated to the surface. It dawned on the scientist that the air (specifically the CO2) trapped in the bubbles, if analyzed, might be able to tell a story.

The scientist was Claude Lorius, a French glaciologist who “was instrumental in the discovery and interpretation of the palaeo-atmosphere information within ice cores.”1 So began the science of charting the earth’s atmosphere through the windows of time via ice core samples.

In the transportation and supply chain industry, there is valuable cargo and then there is irreplaceable cargo. As an award-winning 3PL that specializes in temperature-controlled shipping, we get some interesting requests for shipping unusual freight. This was one of those requests.

The inquiry came in from NASA, and it required a carrier with a pre-cooled trailer standing by waiting for a shipment of ice core samples coming from Greenland, arriving at the 109th National Guard Airlift Station in Scotia, New York going to a research facility in Pasadena, California.

Dino Guthrie is the New York cargo operations supervisor for Polar Field Services at the 109th Airlift Wing of the Stratton Air National Guard Base. Guthrie is no stranger to these shipments. “There are thousands of man hours, thousands of dollars, and thousands of years of ice samples in this shipment, said Guthrie. “It is high dollar and high value, and we get it done right.”

According to Guthrie, the 109th base is the only unit that is used to support the National Science Foundation (NSF) with transport to and from Greenland and Antarctica. “We have the only LC-130 iceplanes in the world here. We have nine ski birds [planes with skis on them]. They are the only kind of planes that can land on the polar ice caps.”

Transporting ice, especially ice core samples, means that a failed reefer unit or improper transloading and storage could prove disastrous. This is not a shipment that could be replaced easily; it represents weeks of intensive preparation, acquisition and hard labor in an extremely inhospitable climate, thousands of miles away. To make the situation even more complicated, it was one of the hottest weeks on record on the East Coast, with heat indexes in some areas well over the three-digit mark.

Sonny Hopkins, Assistant Director of Sales at Choptank, immediately got the ball rolling with our cold less-than-truckload (LTL) team to offer a quote both as an LTL shipment and alternatively, as a truckload shipment. Due to the nature of the cargo and its specific requirements, Choptank recommended it go as a truckload shipment. An LTL shipment would have several customers’ cargo on board and would require several stops. That would mean an indirect route, and taking more time, in addition to opening and closing the doors at multiple deliveries.

After weighing the options and pricing, the customer tendered the load with Choptank. Once the purchase order was received, the sales and operations teams started working on the details to make sure everything went according to plan. The customer required an over-the-road temperature of -4°F, but to be safe, Choptank set the reefer unit at -10°.

Because the shipment went from New York to California quickly, Choptank made sure to put a proven, experienced driver team on the assignment. By using a driver team, there would be more flexibility with hours of service, which are government regulations that require drivers to stop and take mandatory breaks from behind the wheel.

In all the excitement of handling such an unusual shipment, a colleague and I were asked to go to the pickup point in New York to deliver the temp-tail recorder and to oversee and document the operation.

We watched with great anticipation as the C-130 landed and taxied around on the tarmac to be unloaded. It’s impressive size and dual propellers on each wing are a sight to behold. The plane’s contents, which included three cargo pallets, 14 civilians and a lot of individual freight from the project team’s expedition in Greenland, was processed with the military efficiency and expediency you would expect.

“There are different qualifications for pilots who fly these planes,” explained Marty Herzog, one of Guthrie’s coworkers for Polar Field Services. “The planes are owned by the military and the NSF. They use Greenland for training so when they go to Antarctica, the pilots have had real hands-on experience.”

Once the freight unloaded it was time to quickly put the LocusTraxx temperature recorder on the coolers of ice core samples. The pallet was then covered with a thermal blanket and forklifted out to the pre-cooled reefer truck standing by for loading.

The minute the trailer doors opened, a huge billow of cold air and ice crystals emanated from the back of the truck like a pot of boiling water when you remove the lid. Herzog and the driver, Vastly Davygov, slipped and slid on the icy trailer floor putting the load in the head of the trailer with a bulkhead up against it to keep the coldest part of the trailer cold. Every minute counted with the outside ambient temperature nearing 90°F.

Brooke Meade, one of Choptank’s carrier sales representatives, worked diligently to see this shipment through from beginning to end on the operations side. With every shipment, standard operating procedures are par for the course, so if there are any unforeseen issues, Choptank has multiple contingency plans as back-up, including an after-hours team that keeps an eye on all its shipments throughout nighttime hours. WATCH VIDEO.

Choptank started receiving readings from the LocusTraxx temp-tail recorder immediately, providing real-time information on the cargo’s temperature and GPS location of the shipment. These notifications were constantly monitored over the length of the trip. 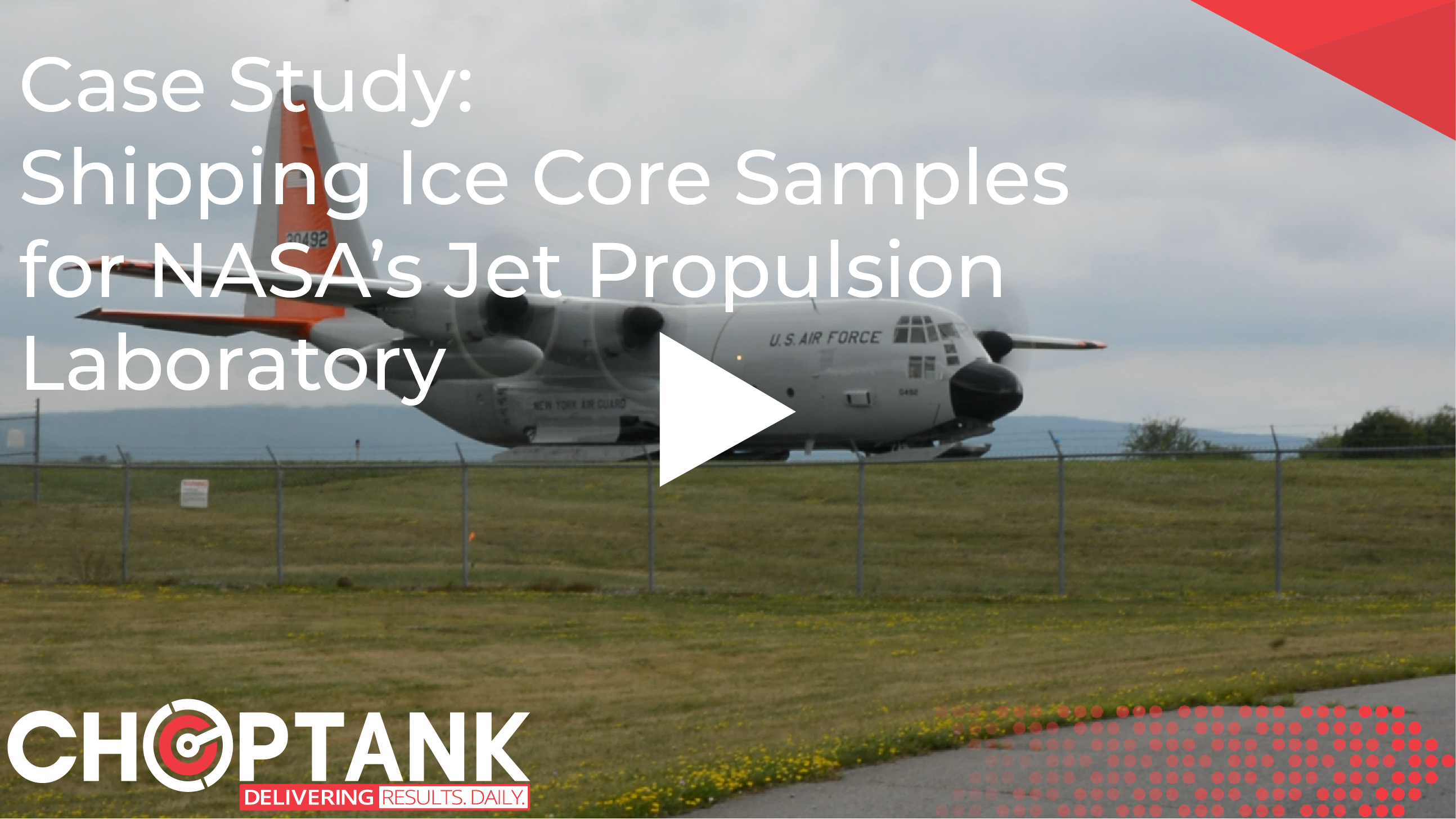 Track every load with our custom-built platform: ORBIT TI